Depending on what you want there are a range of options when it comes to buying a classic football shirts. I have bought a few now and I generally come back to the same places to buy mine, so the recommendations below are based on what I know and love:

Classic Football Shirts have had quite a rise! They were founded in 2006 by two students who, at that time, funded their new business with credit cards and student loans. By 2008 they moved from their home to offices in Manchester City Centre. By 2011 they had grown so much they moved to a 15,000 foot warehouse next to the Etihad Stadium and by 2014 they had to build a mezzanine floor to double the capacity in the warehouse to stock even more! They now have over 25 staff members and literally thousands upon thousands of shirts from across the globe.

They set themselves apart from many other companies by the fact that their shirts are all original shirts from the dates listed, not reproductions trying to replicate a classic shirt.

Many of the shirts as a result are pre-worn, however they will only sell shirts of a good condition. All shirts also come with condition details – ie whether they are in Mint Condition, As New, etc, etc and I have never bought a shirt from them in anything other than top quality condition.

Aside from shirts, they have shorts, socks, training tops and even classic football boots from all across the globe, but club teams and national teams.

I cannot even beginning to describe the extent of shirts they have, but suffice to say, if you want it they will almost definitely have it. 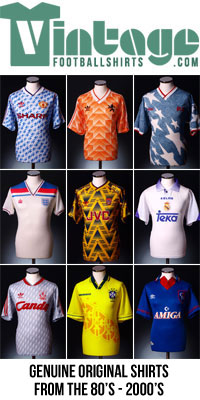 Much like Classic Football Shirts, Vintage Football Shirts also stock original football jerseys as well as rare match worn items rather than reproductions of classic shirts. They were founded in 2010 and have also gone from strength to strength.

The condition of their shirts are always excellently and accurately described – from BNIB (brand new in bag) to Excellent (may have tiny defect, may not be noticeable) – and I have picked up some classics here (Maidstone United 1990-91 home shirt anyone?!).

Along with Classic Football Shirts they have pretty much cornered the market on genuine vintage football shirts. They have a huge selection of club and international shirts from all four corners of the globe.

TOFFS have been around now for 25 years and are a family run business based in Gateshead in North East England. They have over 1,000 garments covering around 250 football teams from around the world.

What I love about TOFFS is their shirts are all handcrafted, which each shirt as close to the real thing as possible. Their shirts really are made to the highest quality.

Obviously this means they are not original shirts, but also, as they are handcrafted, there are some fantastic replicas of shirts from back in the 19th Century. I have a lovely Everton replica 1886 shirt from them.

I love their collection of North American Soccer League (NASL) shirts from the 70s and early 80s. You feel like you are getting a real piece of history with these.

You can also pick up some quality fictional shirts such as replicas of the Escape to Victory shirts – a strange coming together of professional (mainly Ipswich) players and Sylvester Stallone and Michael Caine (and Pele of course).

Kitbag was founded in 1999 and is a huge online sports store with over 10,000 products, although these cover all kinds of sports equipment and accessories. They are a licensed reseller of football shirts and own the exclusive rights to operate the official online stores of Manchester United, Chelsea, Real Madrid, Everton, Celtic, Manchester City and Borussia Dortmund amongst many others.

Their range of retro shirts is just a small part of their business, and the shirts they sell are replicas rather than the original shirts that Classic Football Shirts and Vintage Football Shirts sell.

So if you are not necessarily after an original shirt Kitbag is a good place to look. Their retro shirts are well made, fairly extensive and well priced.

What online shopping round up is not complete without Amazon?! As you probably know you can find pretty much anything on Amazon these days and that includes classic football shirts.

All you need to do is type in retro <team name> shirt and you will probably be presented with a multitude of options.